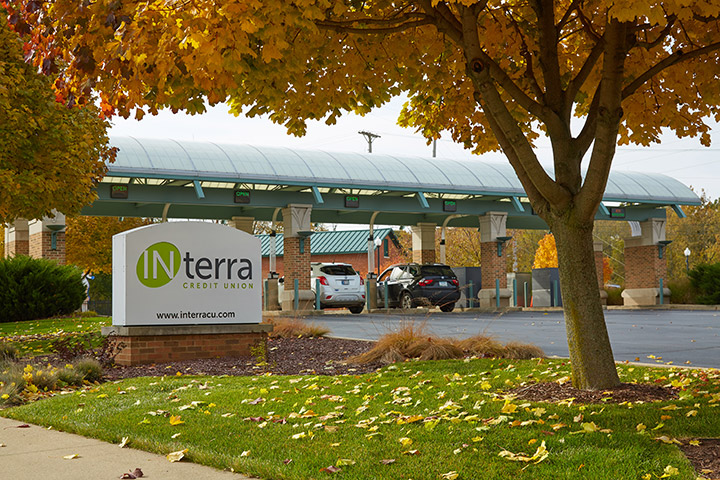 The credit union, based in Goshen, 140 miles north of Indianapolis, Indiana, had a legacy March Networks video surveillance system that was installed in 2006, as well as several third-party systems acquired through mergers with other area financial institutions. Very little was done to upgrade the system during the ensuing 11 years, but in 2017 the credit union’s board and executive management team backed Richard and his team and reinvestment in the system.

“We went through a budgeting process and spent a lot of time deciding what we needed,” said Richard. “We knew we wanted to improve our surveillance coverage and camera quality. We also wanted to be on one unified system.”

Interra Credit Union looked at competitive solutions, but ended up deciding to continue with March Networks.

“We asked Convergint Technologies to show us some options, but the positive experience we had with March Networks weighed heavily in its favor,” said Germann, a retired law enforcement officer who joined the credit union in December 2017.

“I know how important a reliable video surveillance system is when it comes to solving crimes. With this upgrade, we’re much better equipped to keep our employees and members safe while also protecting our assets from losses due to fraud.”

“Reliability was key for us. We used March Networks’ 4000 Series recorders for more than a decade and had very few problems with them.”

“We also liked the new technology we saw from March Networks,” added Richard, “and we already had a good relationship with them and with Convergint Technologies.”

In addition, the 8000 Series are available with March Networks’ innovative “dock and lock” design, which keeps all camera cables securely connected to the back of the unit for quick and easy installation and maintenance. To further speed service calls and optimize availability, technicians can scan a QR code on each recorder chassis with their March Networks GURU Smartphone App. The app enables them to initiate a Return Material Authorization (RMA), view product warranty information, review and change an IP address, diagnose a problem, run a configuration security audit, view video tutorials and more — all using any smartphone or tablet.

As part of its upgrade process, Interra Credit Union seized the opportunity to transition to high- definition IP video, selecting March Networks ME4 Series IP Cameras and integrated Oncam 360° cameras. The 360° cameras are installed at employee entrances, where they also provide coverage of the credit union’s drive-thrus, and in office locations where multiple cameras would otherwise be required.

“We didn’t completely retire our analog cameras,” noted Germann. “We repurposed them for use in some less sensitive locations, and installed IP cameras to cover our teller stations, lobbies and other areas where we needed higher resolution video.”

The March Networks video surveillance system is used by the credit union’s retail team, its fraud department and audit team, as well as by its senior executives.

“The retail team,” said Richard, “uses the system to review video of cash handling practices, trip and fall incidents, and accidents in the credit union’s parking lots. We also pay attention to lobby traffic to make sure we have enough staff to serve our members.”

“Just recently,” said Germann, “there was a case of someone using a stolen debit card at one of our ATMs. The same individual had also used the card at several other institutions locally. We pulled the video, supplied it to the police department. The person was arrested and is now facing fraud charges.”

Health monitoring has been ‘huge’

Aside from the far superior video quality made possible by the acquisition of IP cameras, the March Networks system upgrade provides Interra Credit Union with a health monitoring capability that extends to locations not previously equipped with March Networks technology.

“The March Networks health monitoring functionality has been huge for us,” said Germann. “Before, managers were doing audits of the system once a month, but we could be down up to 30 days if we had a hard drive or a camera go down. Now, we’re instantly notified via email and we can go into the system to get details on exactly what the issue is so we can address it immediately.”

The credit union’s decision to remain with March Networks was also based on the opportunity to grow its capabilities in the future by taking advantage of the company’s Searchlight for Bankingsoftware. Searchlight integrates surveillance video with ATM/teller transaction data and optional analytics to provide a wide range of security, operational and business analysis reporting.

“Going forward, our goal is to be more selective about the video we look at and Searchlight does a great job of linking surveillance video with transaction data and flagging high risk transactions,” said Richard. “Searchlight would also alert us to potential instances of ATM fraud such as skimming and cash-out schemes, so it’s definitely something we’re looking at.”

“After serving 22 years in law enforcement,” said Germann, “I know how important a reliable video surveillance system is when it comes to solving crimes. With this upgrade, we’re much better equipped to keep our employees and members safe while also protecting our assets from losses due to fraud.”